14 Types of Peppers to Know 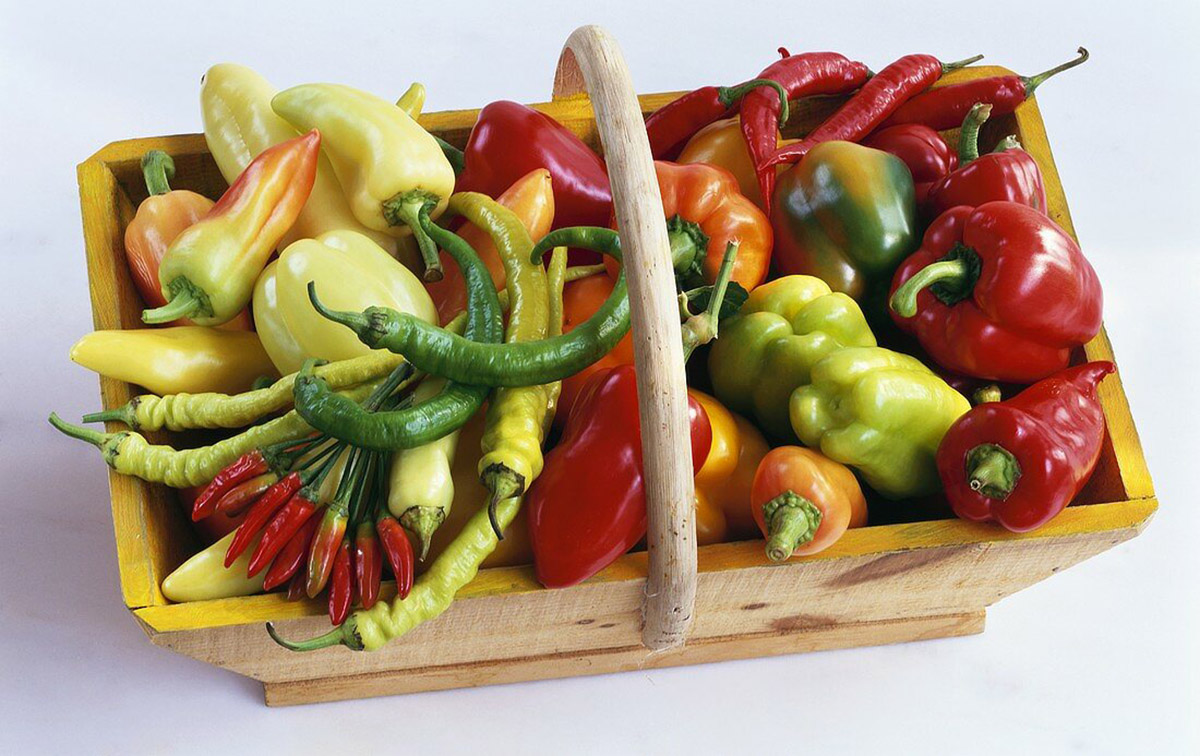 There are so many types of peppers. Some are easy on the taste buds; others are a mild form of torture.
There’s something intoxicating about the way their membranes burn the back of your throat, or that when pickled, they offer a surprising tang to a meal. Some peppers, like chipotles, have this deeply set aroma, as if a plume of smoke might just escape your mouth mid-chew. There’s also face-melting peppers and sweet chilies, juicy ones and bright, crisp ones, too. They’re appreciated in salsas, cocktails, stir fries, soups—just about anywhere a dish or drink needs an unexpected, and delicious, kick.

But not all peppers work for all dishes. And not all methods of cooking peppers complement these seeded and spicy produce. There’s a gastronomical world to explore, with new pepper breeds being invented by the day to get spicier, tangier, and more innovative flavors out there. While it’s estimated that there are over 50,000 different types of peppers in the world, we’ve rounded up the 14 essential ones into a neat and handy guide for people interested in perusing peppers. 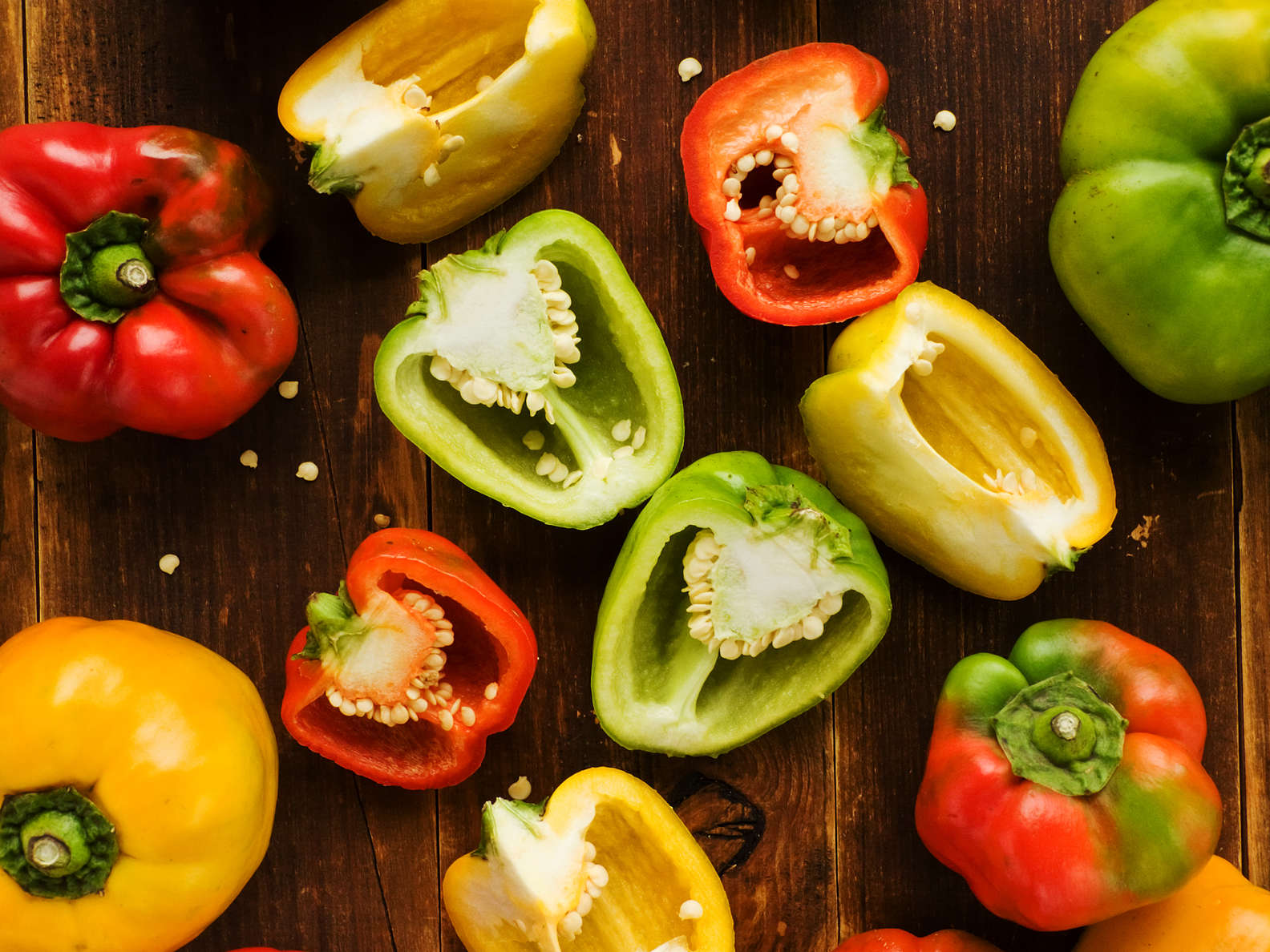 Unlike the rest of the peppers on this list, the beloved bell pepper does not contain any capsaicin, the active component in chilis that give them their renowned burning qualities. On the Scoville scale—the scientific measure of a chili’s spice—bell peppers ring in at zero, meaning they don’t contain any heat. At all. That doesn’t stop them from being delicious, though! Bell peppers are wonderful sautéed and layered into Philly cheesesteak, grilled for fajitas, or stuffed with beans and cheese. They’re named for their bell-like shape, and come in a variety of colors (most commonly green, yellow, and red). 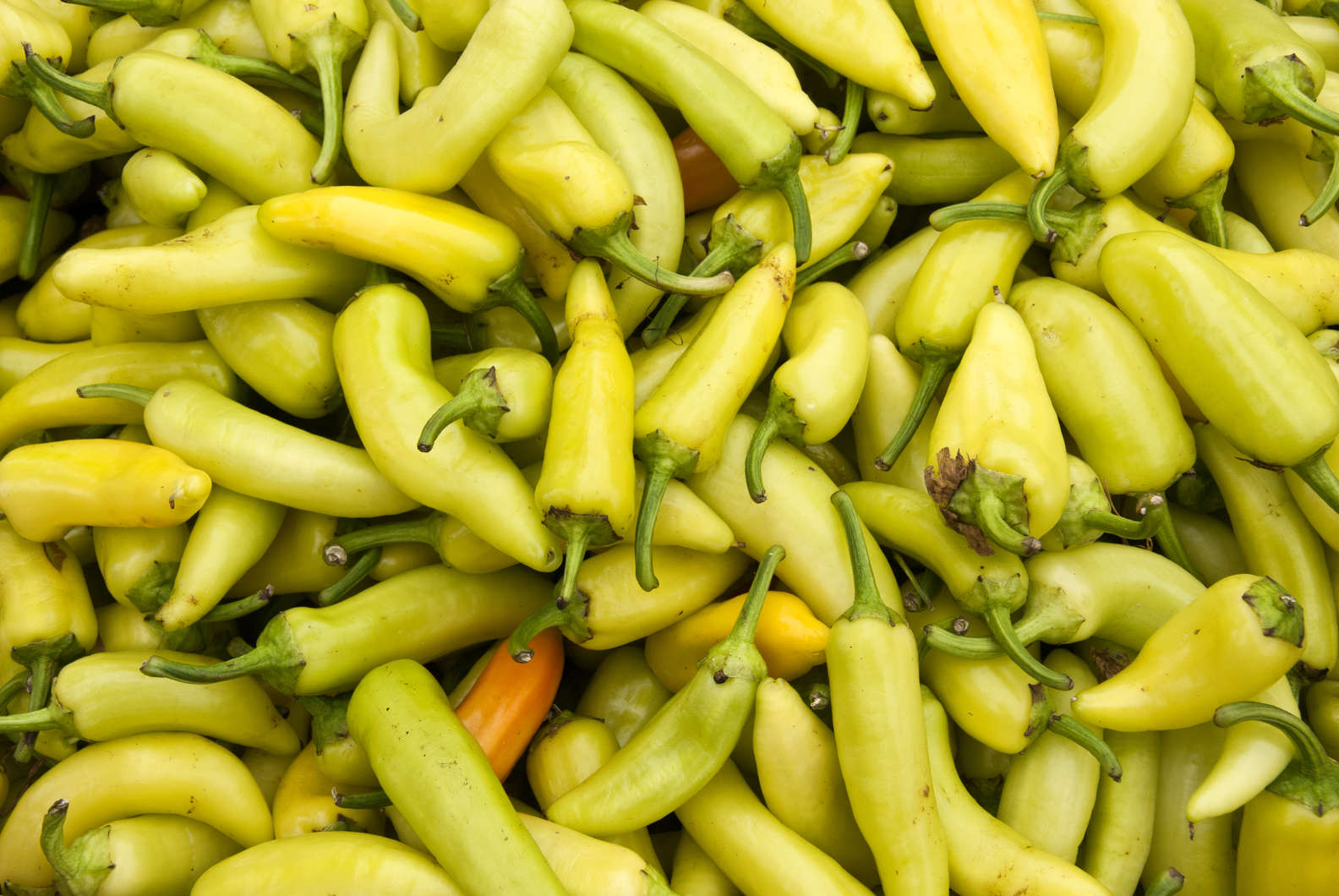 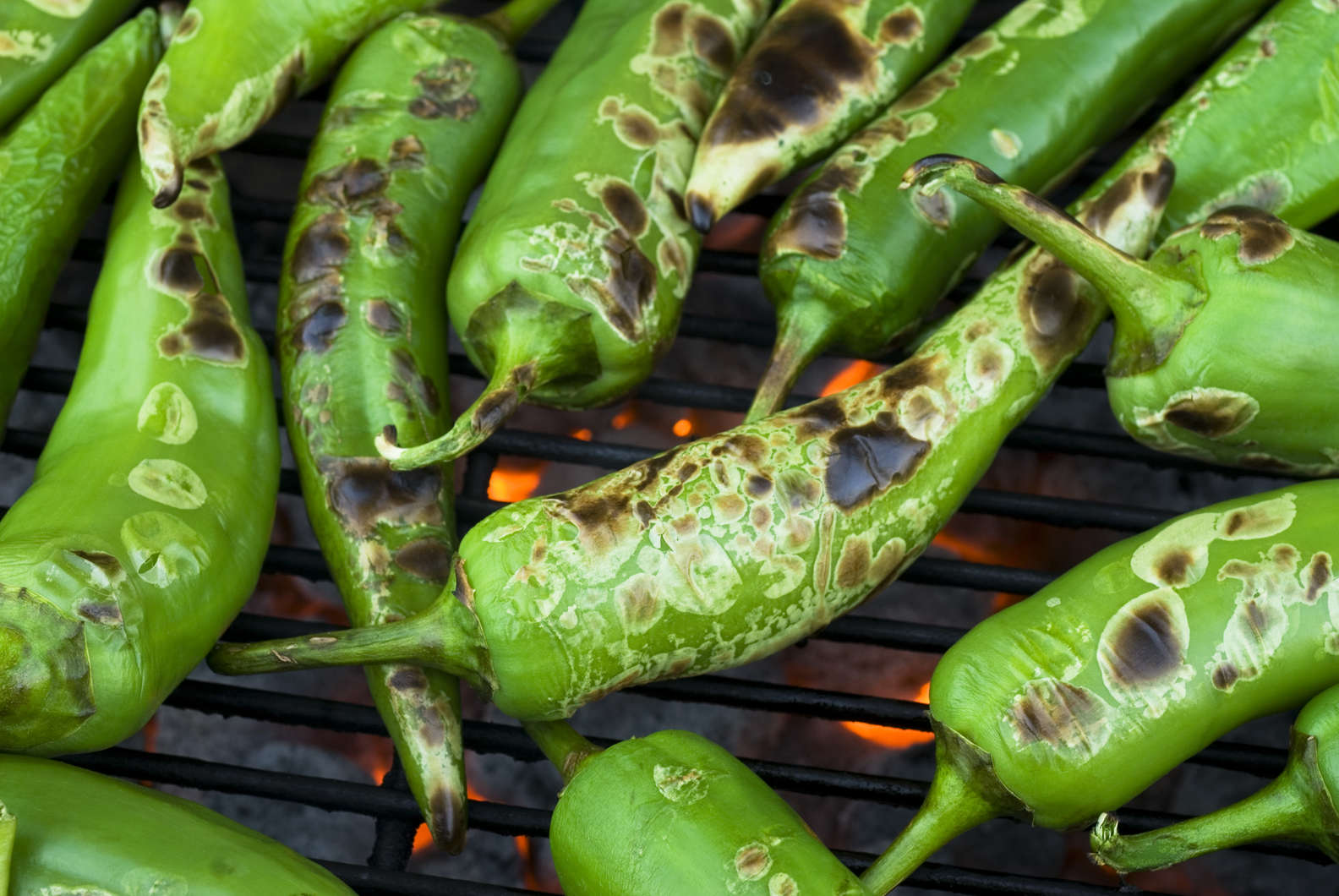 Anaheim peppers, named after the Southern California city where these not-so-fiery peppers are grown, are a mild chile that boasts a ton of flavor without the raw burn that comes with other chilis. They’re delicious fresh, charred over an open flame, or roasted in the oven. The peppers are typically green, and large enough that they can be stuffed à la chile rellenos—a beloved Mexican dish where the pepper is filled with meats and cheese, fried in an egg batter, and bathed in a tomato sauce. 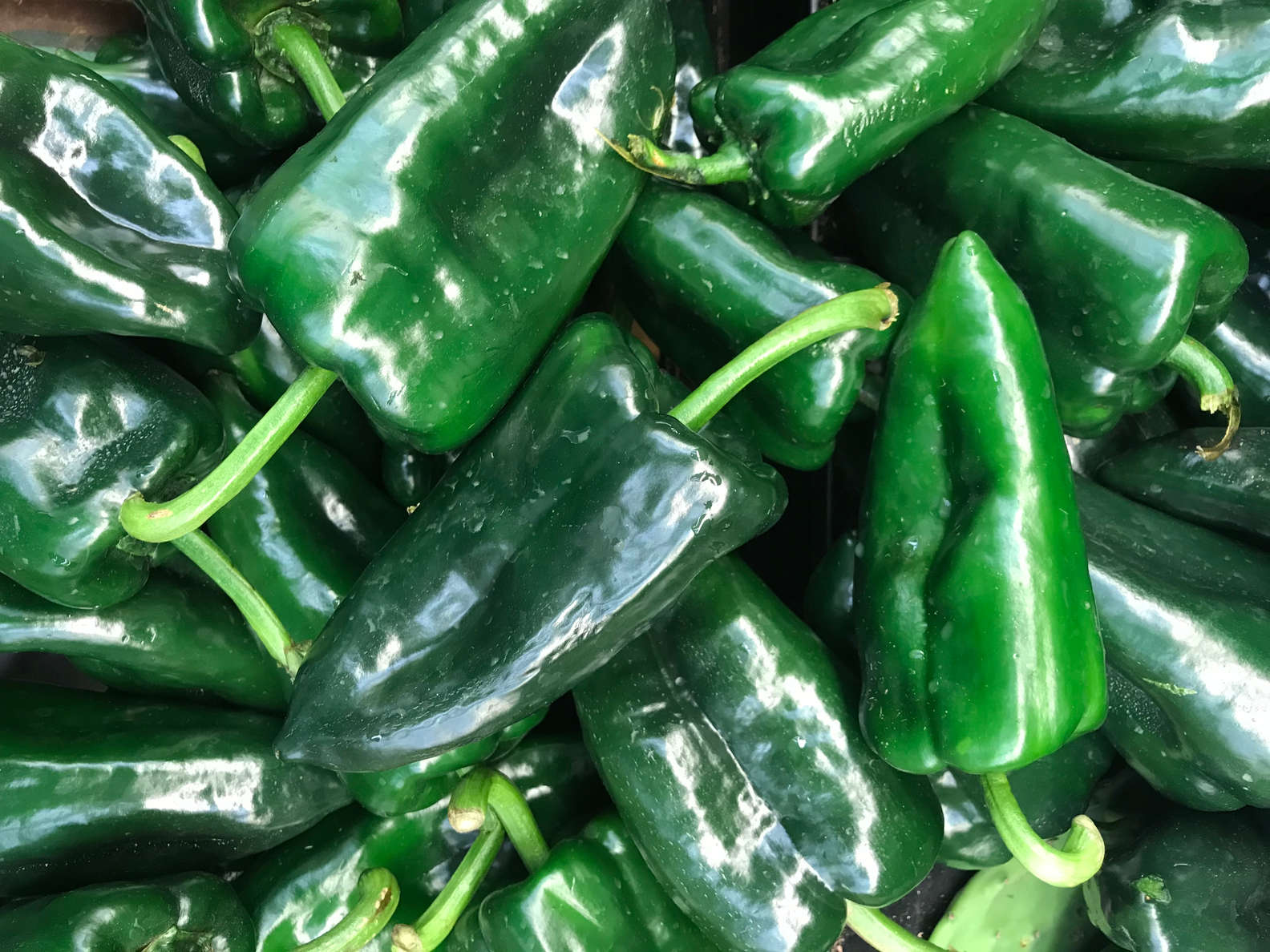 Poblanos are large, mild peppers that originate from Puebla, Mexico. When dried, they’re referred to as ancho chilis (which is Spanish for wide, in reference to the pepper’s bulbous form). Poblanos are the peppers that are typically used in chile relleno. Though the pepper lacks heat, especially when green and less ripe, some poblanos (particularly ripened red ones) have been known to pack a surprisingly spicy punch. 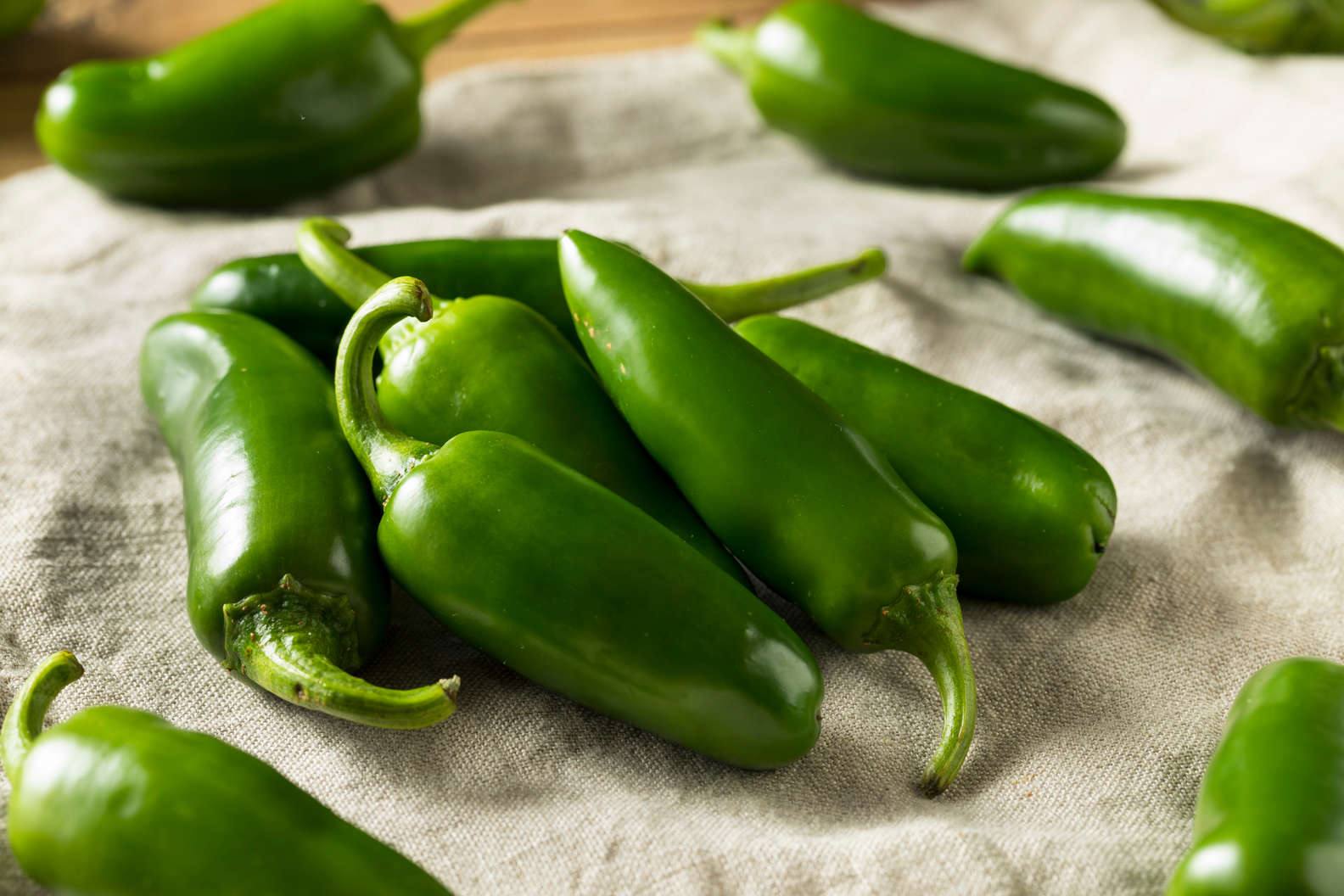 Jalapeños are a margarita's best friend. They get along well with nachos, too, and guacamole, salsas, and pizza. Pickle them, slice them fresh in your banh mi, or toss slivers of them in your salads. When smoked, they take on a new identity as a chipotle pepper. Though jalapeños range in heat—where some varieties are mild and others rank much higher on the Scoville unit—they tend not to be face-meltingly spicy. A trick to reduce heat in sauces and salsa that call for jalapeños is to remove the seeds and membrane and use only the flesh. 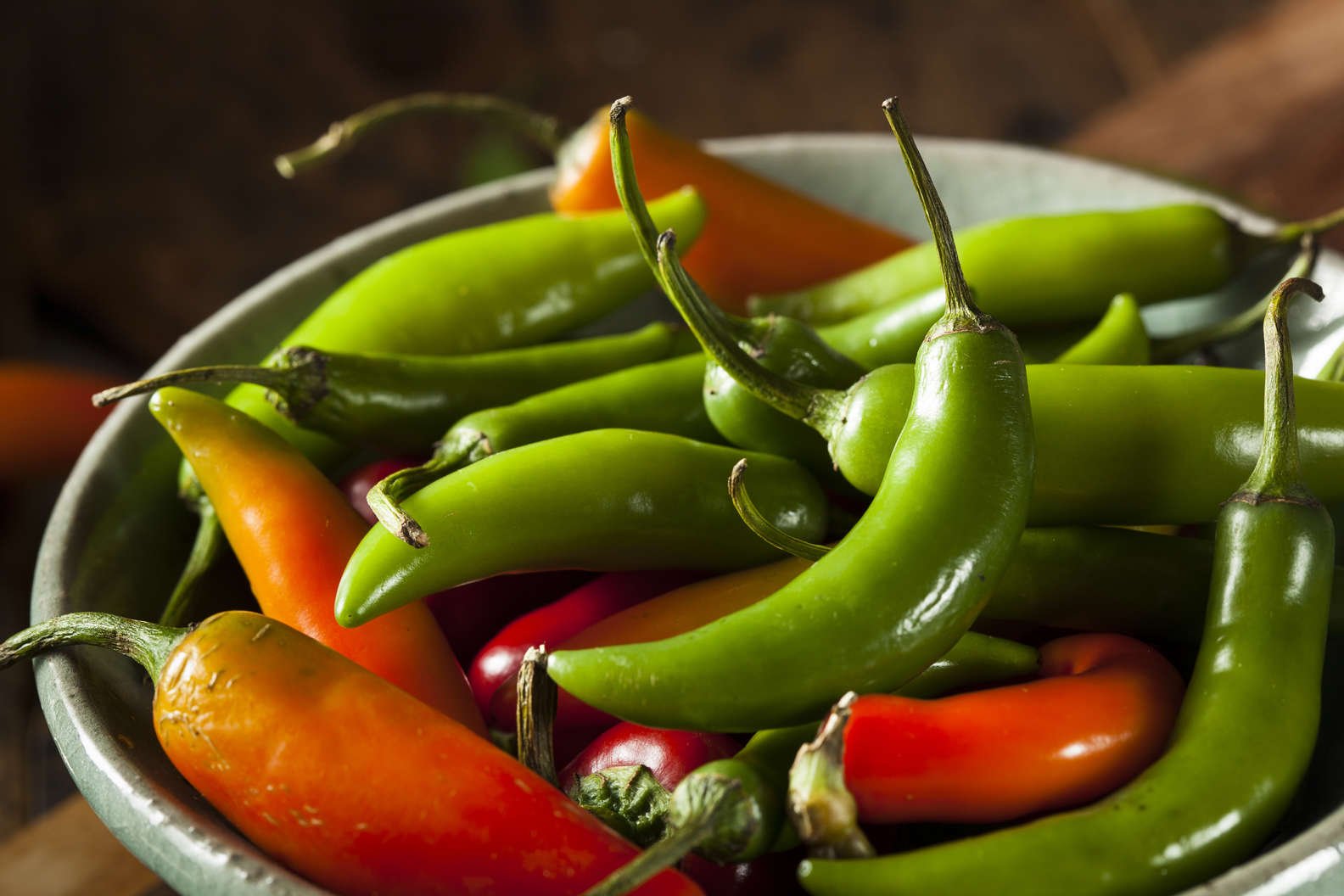 It’s said that serrano peppers are about “five times hotter than the jalapeño.” Though they pack a punch, serranos are nuanced in flavor as well; some varieties have sweeter flesh while others taste bright and fresh without overwhelming heat. The word serrano means “of the mountains.” These pepper plants tend to grow in the elevated regions of Mexico, like Hidalgo and Pueblo. Swap serrano peppers in place of jalapeños in salsas and guacamole if you’re looking for more fiery flavor. 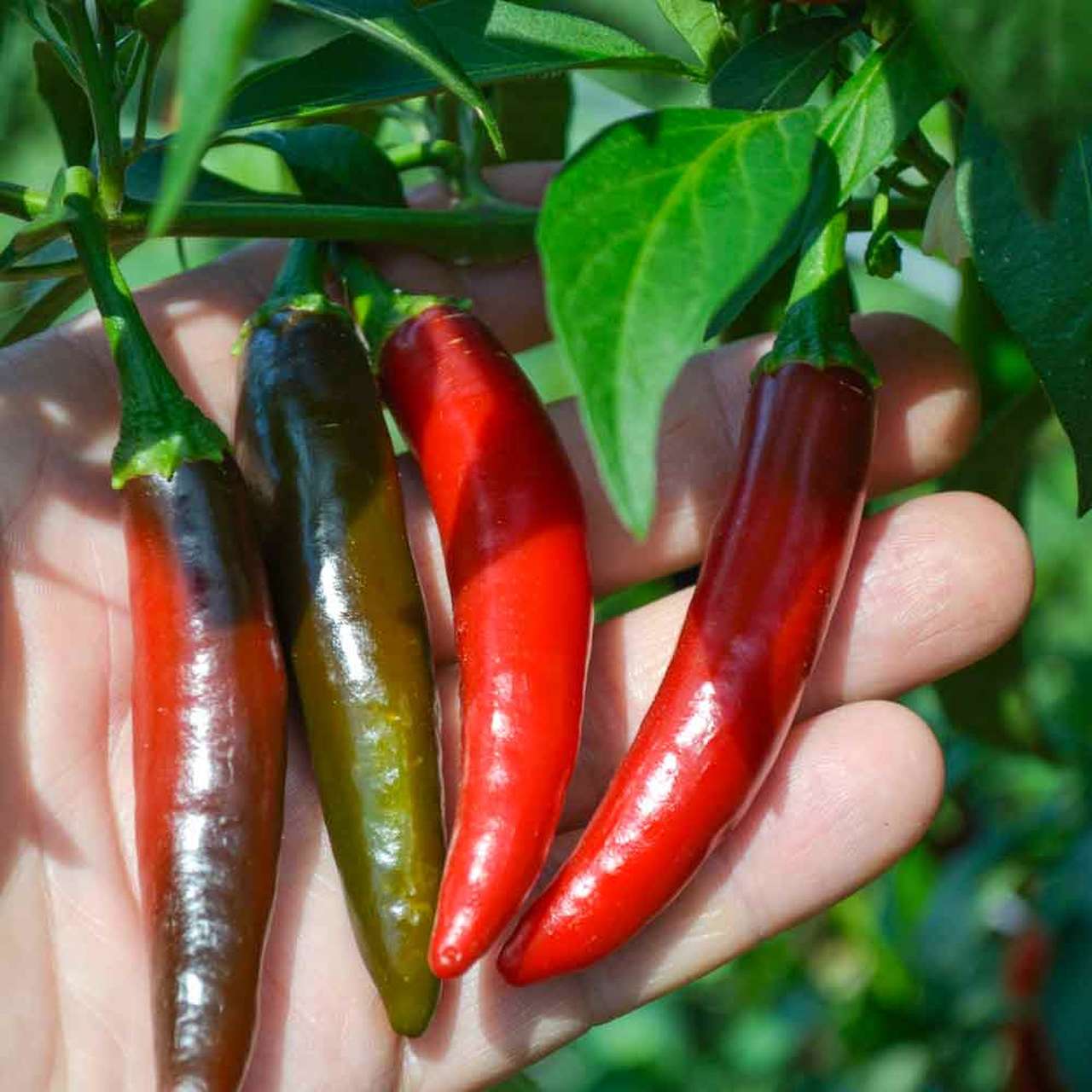 You may have spotted dried or powdered chile de arbol at your local Mexican grocer. The pepper—which can be upwards of six times the heat of jalapeños—is used in salsas, hot sauces, enchiladas, and more. Besides cooking, the chiles de arbol also can be used for decorative purposes thanks to its bright red color that remains vivid even after being dried. 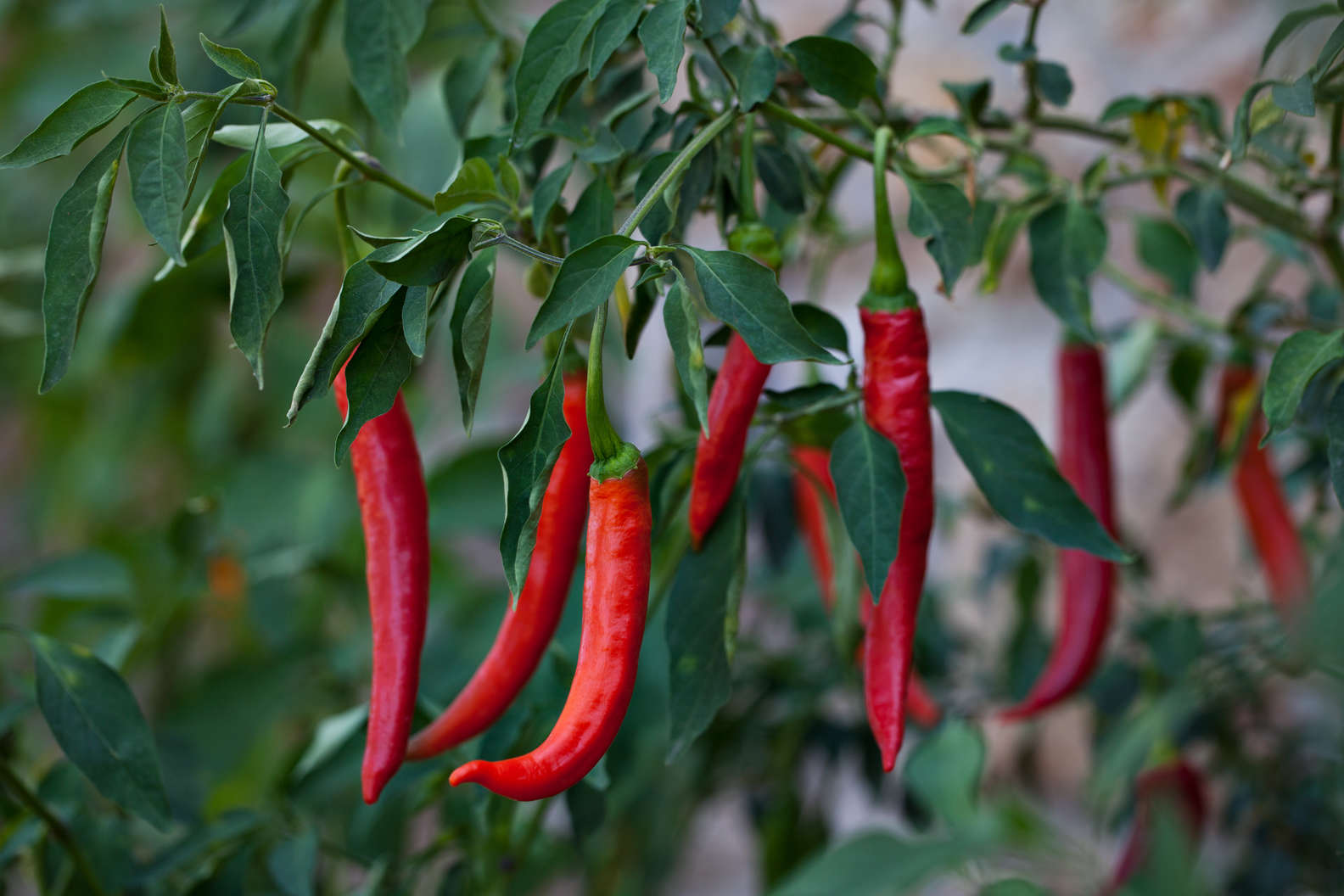 Yes, these are the same peppers that are ground down into a fine red powder and found in your spice rack and on your deviled eggs—a way more flavorful option than paprika. The actual chilis—when fresh and in their whole form—are usually skinny, elongated, and red, with moderate heat. That being said, you’ll most commonly find cayenne as a dried powder. The pepper works well in nearly every dish—yes even hot chocolate—just check the ingredients before you buy a bottle. Some spice purveyors sneak in other chilis instead of slinging real, pure cayenne powder. 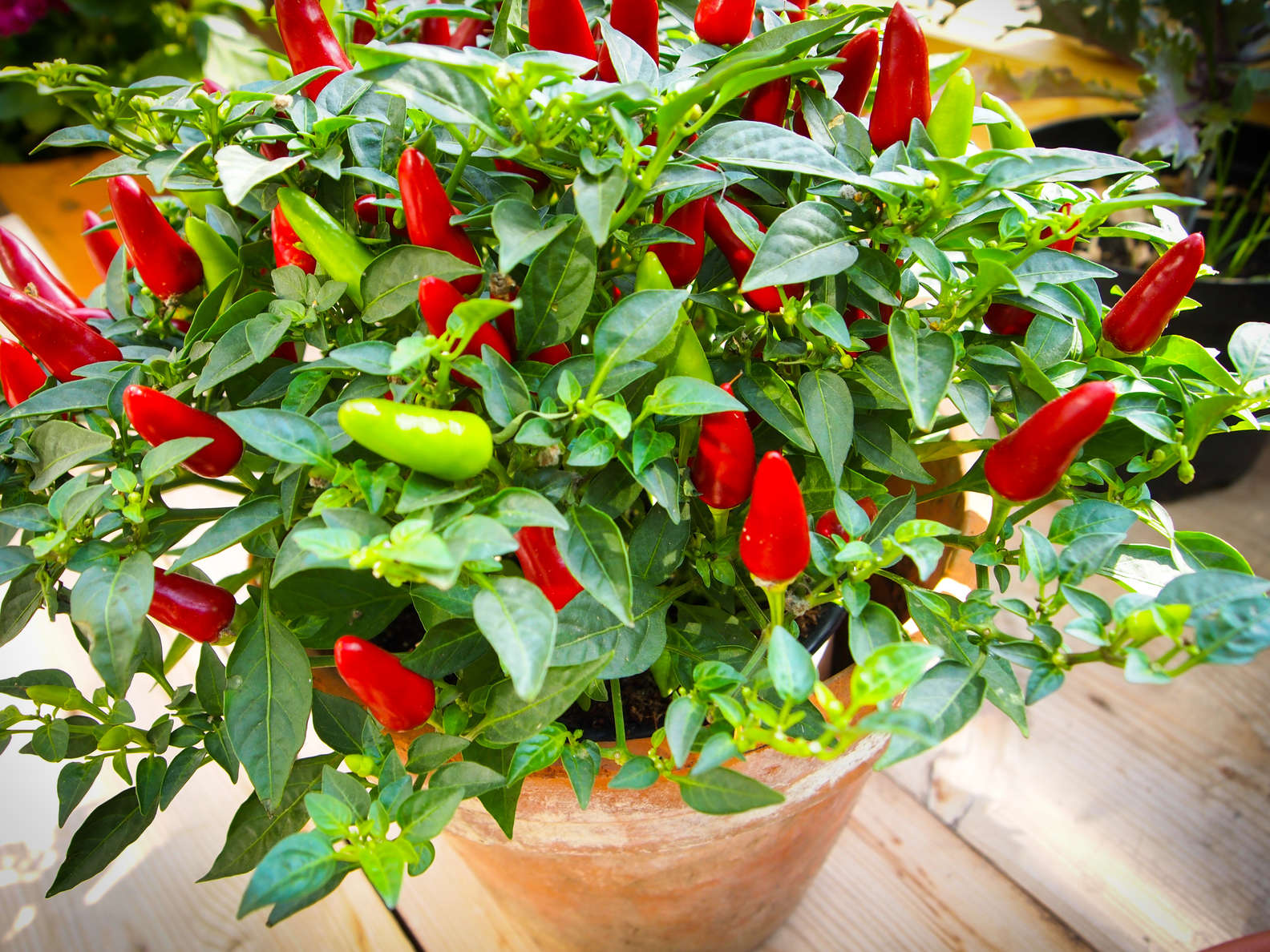 Tabasco is the MVP of diners everywhere: the perfect addition to scrambled eggs, hash browns, and fried chicken. In case you didn’t know, the tabasco sauce we all know and love is made from—you guessed it—tabasco peppers. The peppers are named after the Mexican state of Tabasco, where they grow in abundance and are used in the local cooking. The pepper changes color with maturity, and are bright red at its peak ripeness. It’s also one of few peppers that can actually be described as “juicy.” 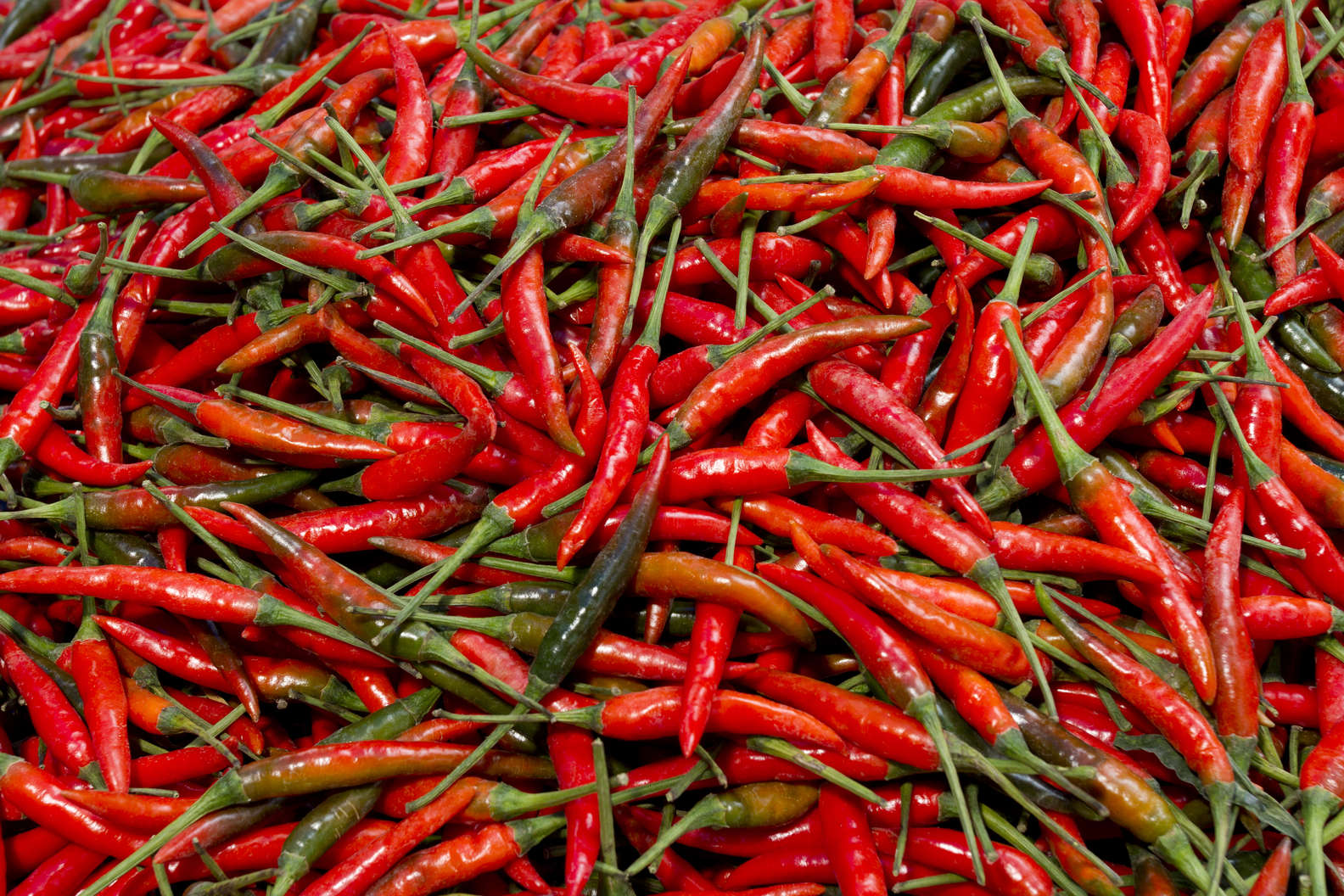 Though this chili has many names, it boasts one real flavor: intense spice—the kind that will make you fan your mouth and down a glass of milk in record time. Bird’s eye chilis are commonly found in Southeast Asian cuisine, where they complement curries, stir-fries, sauces, and salads. Like many chilis, they made their way across the world via South America, and are also found throughout Africa. In Thailand, they’re known as phrik kee noo—or mouse poop chili—supposedly because although they are small (like mouse droppings), they are undeniably noticeable (also like mouse droppings, I guess?). 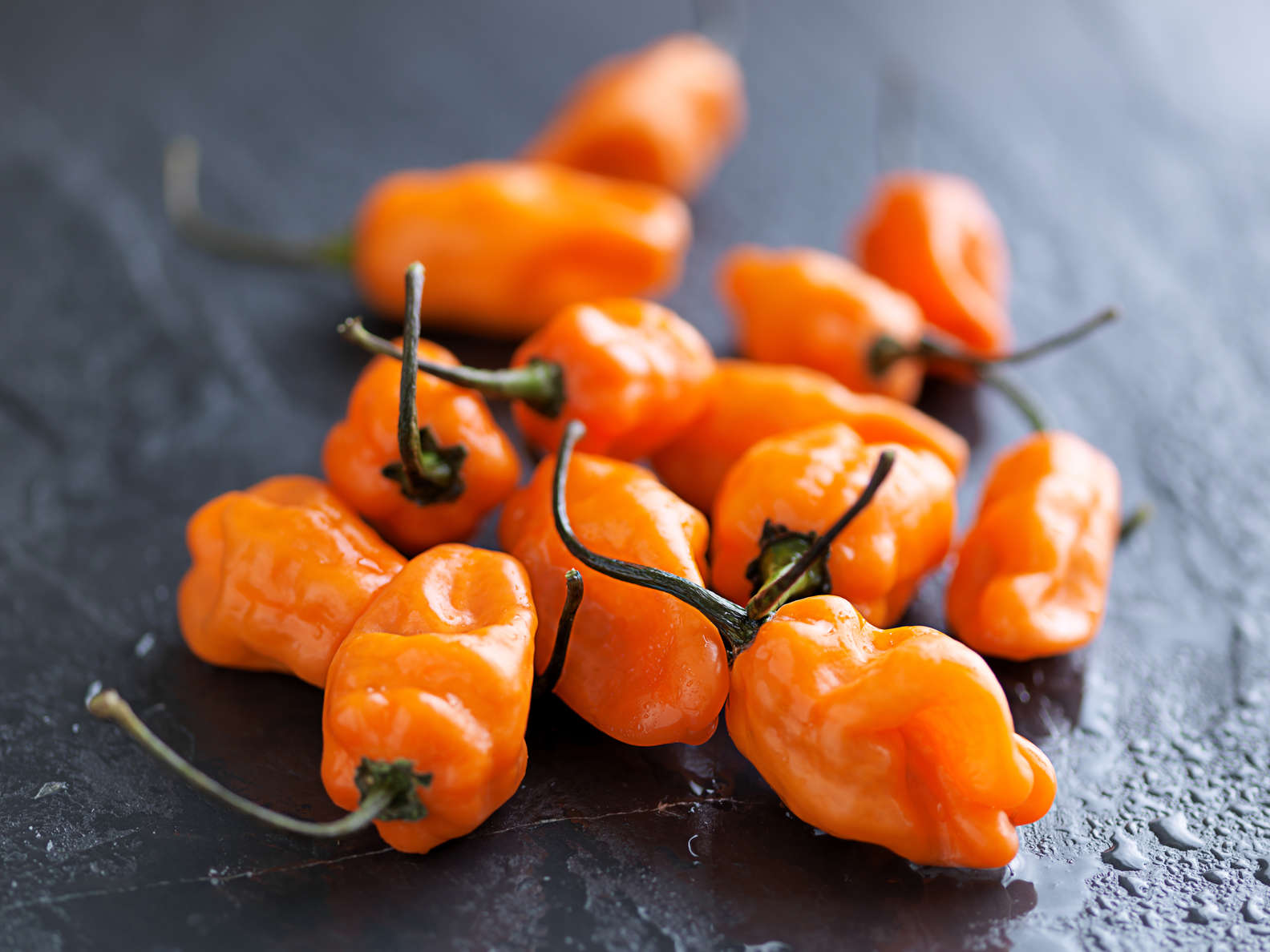 In 1999, the habanero was considered the world’s hottest chili. Though that’s no longer the case, the small orange peppers (which occasionally come in red, yellow, brown, and green variants) still pack a walloping punch. The habanero originates from the Amazon and has made its way across the Americas and Asia, where it is used in salsas, sauces, and any dish requiring some heat. 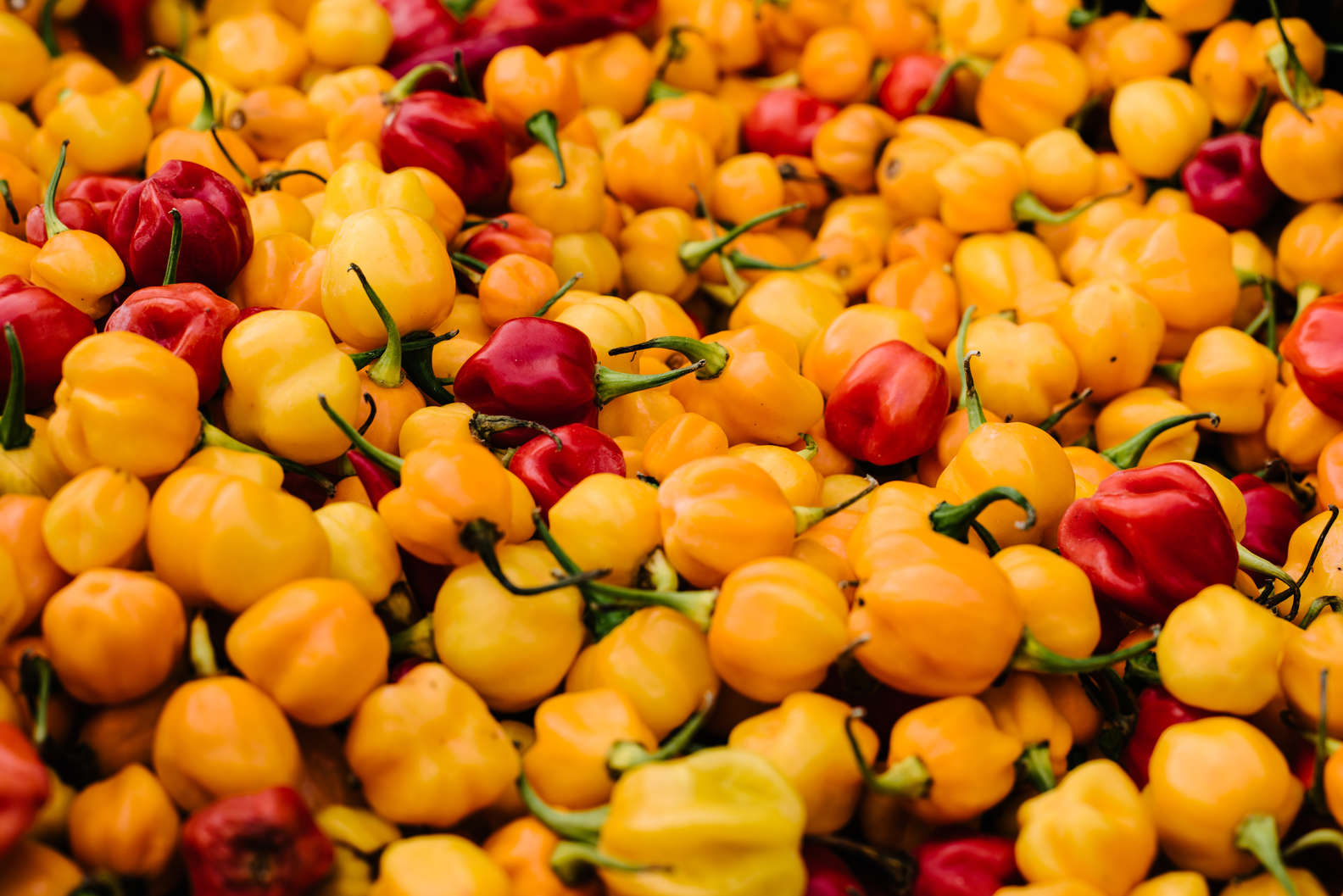 Scotch bonnets are flat, small, and spicy peppers that allegedly look like traditional Scottish Tam O’ Shanter caps, hence the name: Scotch bonnet. For a tiny pepper, however, Scotch bonnets boast a Scoville range of 80,000 to 400,000 (compared to a jalapeños much milder range of 2,500 to 5,000)—making them a properly pepper-y chili. Scotch bonnets are most commonly used in Caribbean cuisine and find their way into pepper sauces and jerk dishes. Although they look somewhat similar to habaneros, and have the spiciness to back it up, instead of having a similar tangy mouthfeel, Scotch bonnets can often taste somewhat sweet. 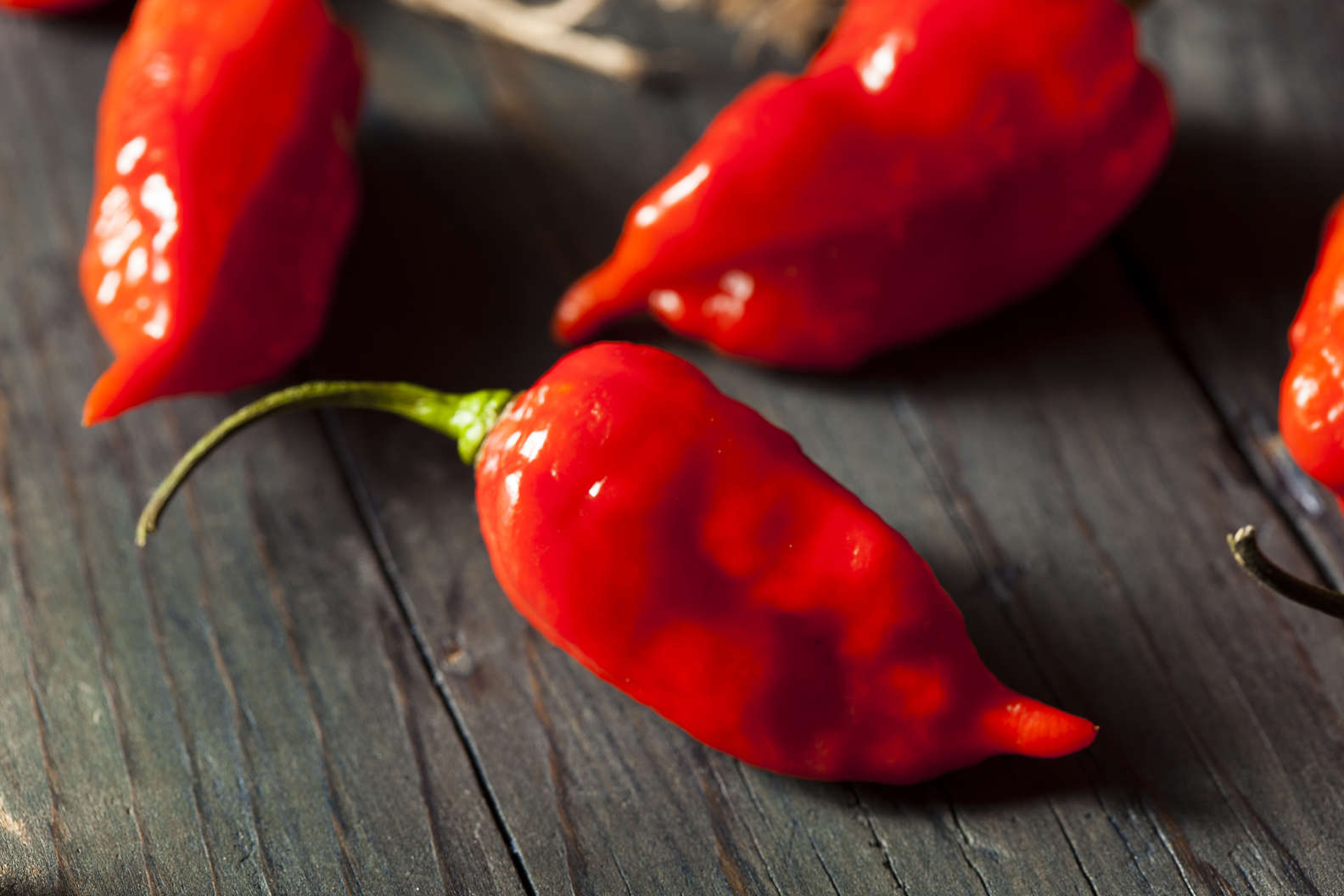 The ghost pepper, which is also called bhut jolokia in its native India, is one of the spiciest chili peppers in the world. In fact, the ghost pepper is so hot that it's been used as a natural animal deterrent in India, to keep the large wandering mammals from trampling on farmland and eating crops. Ghost peppers are consumed both fresh and dried, and sprinkled into curries, chutneys, and fermented fish. Even Trader Joe’s has capitalized on the surrounding hype of the fiery pepper, selling dried ghost peppers (complete with a grinder) and releasing a ghost pepper potato chip (that honestly tastes like a glorified barbecue chip, but with extra heat that’s not nearly as spicy as an actual ghost pepper). 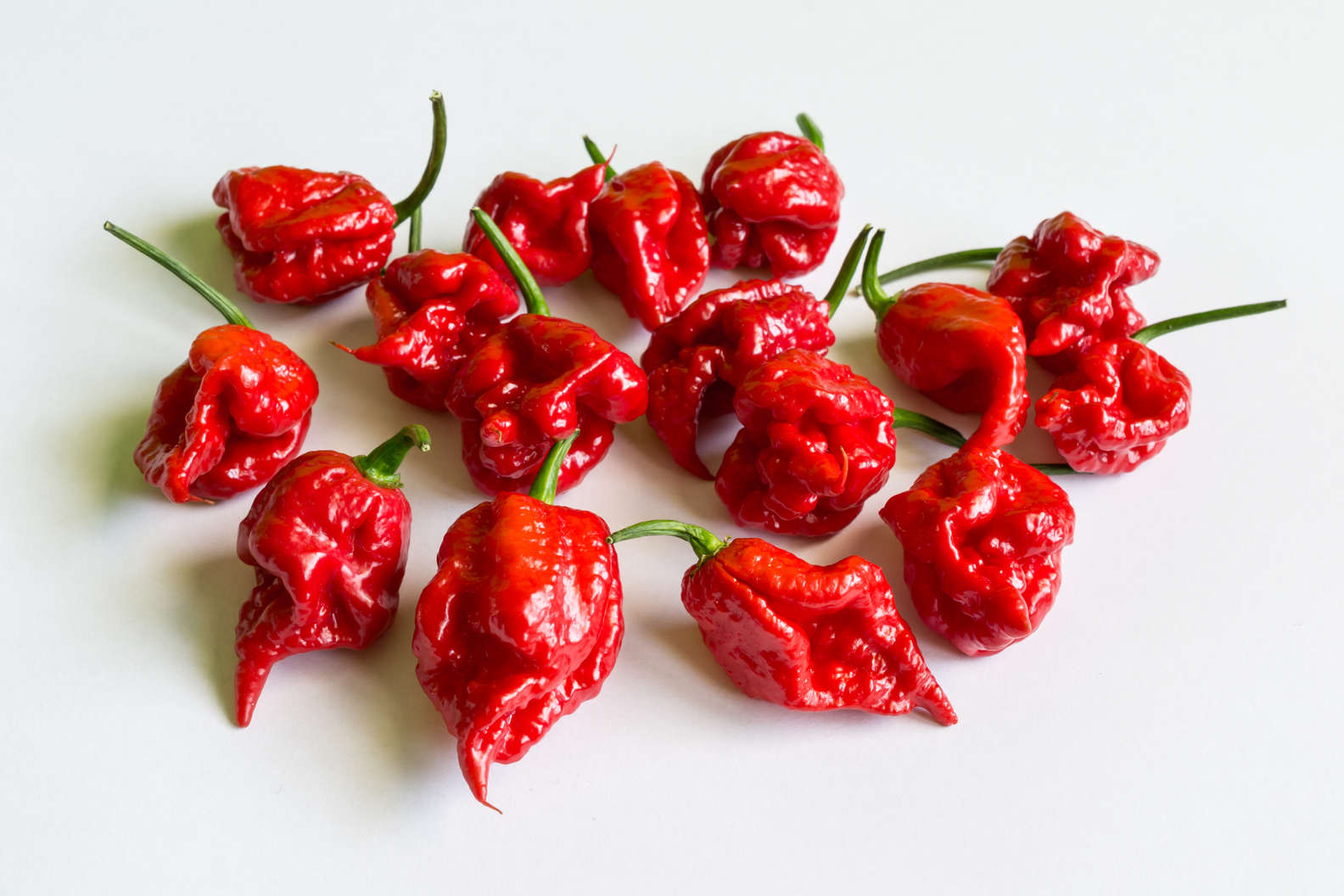 According to the Guinness World Records, the Carolina Reaper holds the title for the world’s hottest pepper, today. The Carolina Reaper is stout and scarlet red, with a wrinkled, curved tail that gave it the name “reaper.” It’s the product of breeding ultra hot peppers together and chasing after a tongue-numbing, potentially headache-inducing chili. Carolina Reapers are mostly used to create hot sauces for the brave (or masochistic).